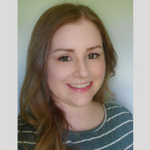 We have a list within our Data Hub that needs to be sorted in a very specific order. We import this list into several spoke models on a recurring basis and in the past we've had to manually reorder the lists in every spoke model when new items are added (because new items are always added at the bottom of the list).

To take advantage of the new order list action, I want to assign a ranking to each list item in my data hub and then use that ranking in my spoke models to sort the list. This list has the potential to be large so I want to avoid manually assigning a ranking to each item. I want the system to automatically rank/number the items in the order in which I have them sorted in my data hub list.

In my Data Hub, I created a module and gave each list member the same number. I then used the RANK function with the SEQUENTIAL equal value behavior option to rank/number the items how they appear in the list. However, I noticed that the rank function produces different answers for the child list items depending on when they are added to the list. 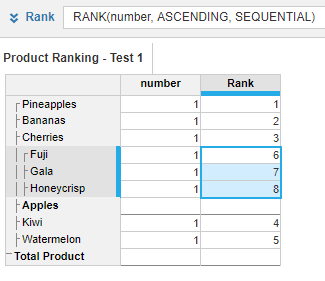 List 2: The 6 products and the 3 children of Apples were all added at the same time via an import action. The result is that the children are listed in order with the rest of the items. 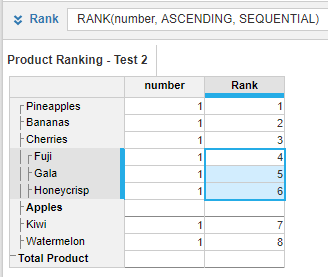 Because I can't always ensure child list items will be added at the same time as their parent, I'm hoping someone has a workaround or knows of another function that can be used to rank/number these list items automatically.